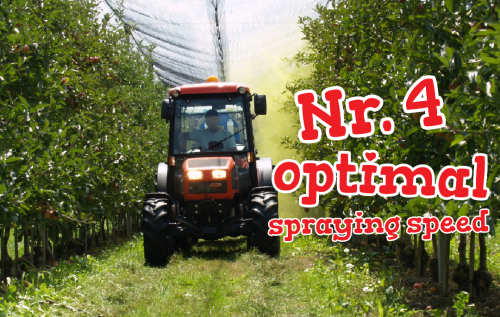 The structure of “green wall” in Gala and Jonagold cultivations differed a lot, this is the reason that the coverage percentages were also very different. The picture bellow shows different coverage rates of WSP (water sensitive papers) positioned on different parts of the tree in cultivation Gala. The upper leaves were turned upwards (in the direction of the sky), the ones below are those which were turned downwards. Left picture shows primary driving speed (6km/h) and the right picture shows increased driving speed. The first glance on the picture bellow allows us to visually claim that the deposit in both cases is good, but on the other hand we can see some differences. 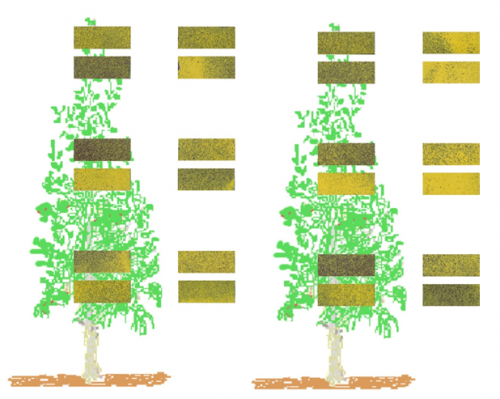 What follows is a statistic analysis of data gathered from WSP (%).  According to the opinion of some researchers for average effect of protection agents, 15% of target area should be covered, which means to have 85 droplet prints per cm2 (Deveau 2013). This applies only for foliar application of agents, which have a good secondary distribution. 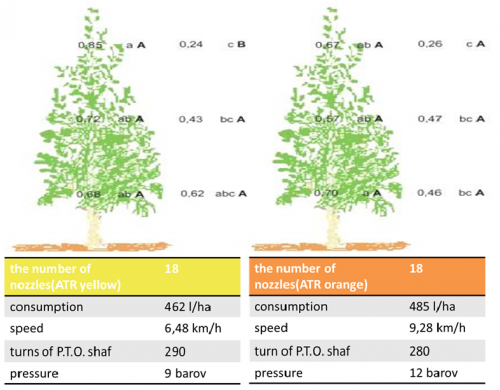 Normalized deposit (Gala, double axial ventilator, left tree 6km/h and right 9 km/h). Small letters represent values in different spots of tree with the same working speed, which differ from each other according to the Turkey HSD test (a < 0,05). Capital letters with different fonts represent significantly different values in the same spot of the same tree with 2 different driving speeds.

The Gala cultivation was sprayed with primary speed of 6,48 km/h (left) and increased speed of 9,28 km/h (right) and shows to a higher normalized deposit (Spot 5) in case of increased driving speed or the same in all other spots. Both speeds show a better deposit inside the crown.

Deposit results with use of water sensitive papers (WSP). 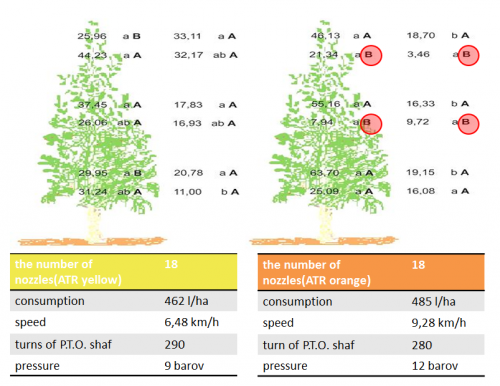 When comparing both working speeds it is interesting that all upper spots (spots 3,4,5,6) in average had a slightly worse or the same deposit (all A) in comparison with lower spots (3,4,5,6 - all B). The deposit in spots 1 and 2 was a lot better (upper and lower side of WSP) with higher driving speed. The Gala cultivation sprayed with primary speed 6 km/h had a very good optimal allocation (almost all spots above 15%) except in spot 1 in the part bellow. Increased spraying speed resulted in some minor changes in spots 3, 4, 5 where the result just slipped under 15%.  This information refers that increasing of working speed in cultivation Gala spoiled the quality of deposit. But the truth is that the air capacity used with higher working speed was too low and 300 turns of P.T.O. shaft per minute are not enough for optimal results.  For optimal quality of deposit 350 – 380 turns of the P.T.O. shaft would be needed.

Increased working speed (from 6km/h to 9 km/h) in our case didn’t cause significant deterioration of spray deposit quality. This is shown by very small differences in different spots of the tree.

The decision of increasing the working speed when spraying depends on interactive effect between sprayer characteristics, airstream produced by the sprayer, tree shape and nozzles used. When increasing spraying speed, we should also adjust the capacity of the fan. Increased spraying speed needs also higher air capacity, except if it is already too high in the beginning.

Are You eager to learn the results in Jonagold cultivation? Follow us in next issue – nr. 5. 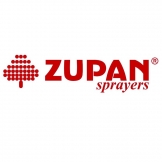