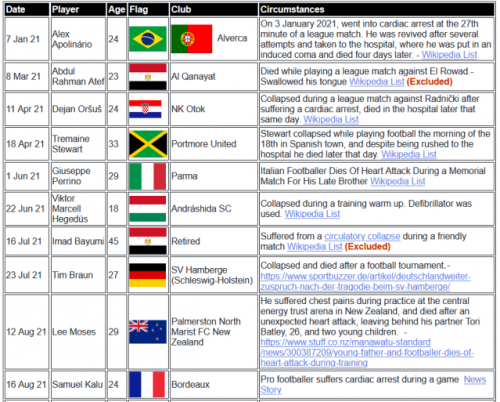 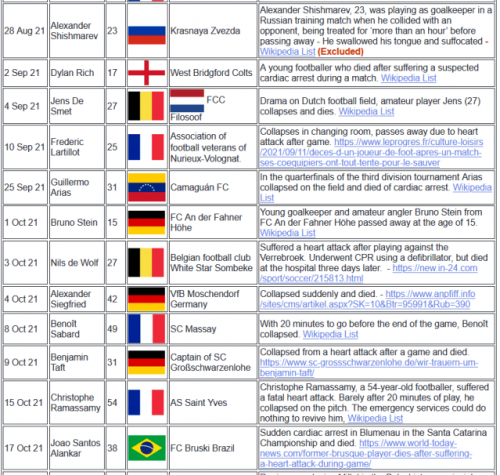 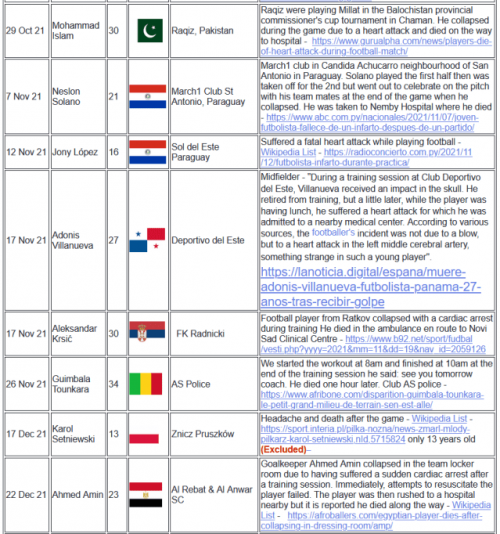 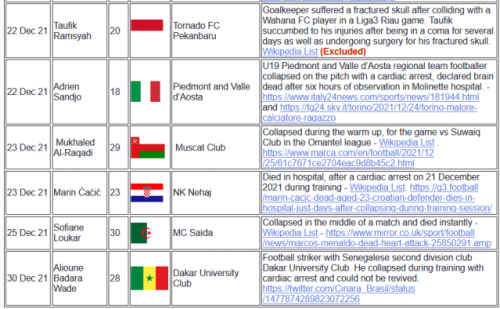 The data within the table was obtained from the following – 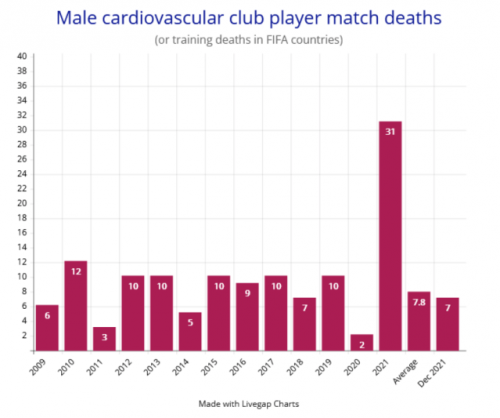 There were more than 15x as many deaths from heart attacks and strokes in 2021 than there were in 2020.

If you are not particularly athletic then hopefully your chances of getting a heart attack have not increased quite so much.

But that is only a small part of the bad news. The real problem is this…

That is a straight up exponential rise Quarter on Quarter. 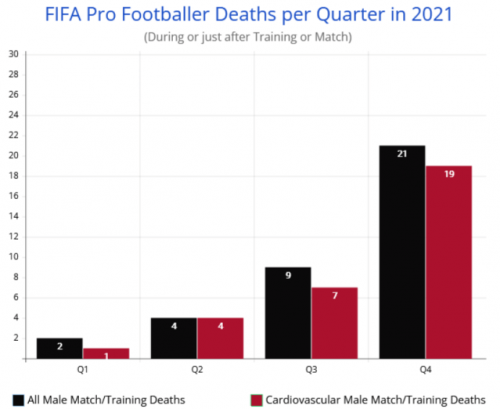 Cardio vascular football deaths are doubling every quarter. So by the end of 2022 they will have risen to 320 per quarter (40, 80, 160, 320). The advice given to footballers who collapse but survive is that they should cease all strenuous activity for 3 months. These figures reveal that all athletes who are vaxxed should do the same thing.

All pro footballers and all professional athletes therefore have two choices. Either stop taking vaccines or stop doing sports. If these vaccinations continue we are at risk of becoming a non athletic species.

8.9 million out of 55.4 million deaths worldwide in 2019 were from heart disease. This is 16% of all deaths. So if heart disease deaths went up by a factor of 4 times in all age groups in all activity classes worldwide, then overall deaths (excess mortality) would go up by 48%. Well, interestingly OneAmerica life insurance found that the risk of death for 18-64 years olds in Q4 had gone up by 40% above the 5 year rate. And the age range of 18-64 year olds would contain all the athletes of course.

OneAmerica data is saying that it is not just athletes who are dropping dead of Cardiovascular failure (or other terminal conditions) at 4 times the normal rate due to these vaccines.

Worse still we can expect mortality rates to increase exponentially over the next year, doubling each and every quarter.

We all have the same heart muscle, athletes and couch potatoes alike. It is just that more sedentary people do not use all their heart muscle and so do not hit a brick wall and keel over so quickly. The high intensity cardio athletes are the canaries in the coalmine for us coach potatoes.

What is happening to them very quickly will be happening to us more slowly. They are dying today at 400% of the normal rate. We shall die tomorrow at 400% the normal rate. Because heart muscle does not recover after it is damaged. If a vaccine kills an athlete in a few months it will surely kill a couch potato in a few quarters. Especially if said sofa spud continues to mash himself up with more booster shots.

The media cannot hide the death of a pro footballer during a game and neither can a corrupt government statistics department resurrect him. These deaths are the most accurate and open data set we have. So we should pay them very close attention. They are visible tip of the iceberg of vaccine mortality. Athletes ask as much as it is possible to ask from their hearts. So the day when their hearts cannot answer comes much sooner to them than it does to us.

The recent American Heart Association Paper given in a speech by Dr Steven Gundry to the American Heart Association in Boston on November 12-14 found  that mRNA vaccines more than double your 5 year chances of getting a heart attack as measured by various inflammatory markers  The expose covered this in their article on football deaths of December8. But that data is already out of date since the heart attack risk doubles every quarter in the vaccinated which these FIFA results are declaring.

But Cardiovascular problems are not the only damage that genetic vaccines do to our bodies. Equally dangerous – although quite not so widely publicised is the immune system degradation that they cause which is deliberately misrepresented as vaxines waning in efficiency.

Why are the Government so desperate to vaccinate us all?

1. The economic answer is that the Health Service has now been 100% corrupted by the Pharmaceutical Industry with a lot of help from Fauci Gates Collins etc. A doctor with 10 years of training and 20 years of full on clinical experience is no longer permitted to decide how to treat their patients based upon that training and experience. No. Instead they must follow the treatment protocol prescribed by the relevant regulatory agency, which agency is funded by assorted Billionaires acting as agents for Big Pharma. This becomes the perfect business model for the drugs companies. The perfect customer for Big Pharma has absolutely no immune system at all. I mean what does the human immune system do? Really what does it do? IT REDUCES THE PROFITS  OF BIG PHARMA.

So the more successful drugs companies, having won the battle against the less successful ones, realised that their true enemy was now your immune system. If they could destroy that then you would have absolutely no choice but to be a very regular and very lucrative customer of theirs. Hence the vaccines destroy your immune system with a new form of VAIDS. They are a man made disease sold as a cure for a man made disease.

2. Politicians are not interested in your health. The Lords Witnesses run an orphanage in Africa and one of the kids their was left at our gates suffering from AIDS (his mother having died of HIV). We have to pay for HIV drugs for him. They are not free. If we fail to give Moses the AIDS medication he dies. But nobody has made AIDS medication compulsory. There is no HIV medication mandate. There are no HIV Passports and HIV has killed way more people the Covid will ever kill. The government does not care if you live or die from AIDS which kills so many young people but we are to believe that they do care if you live of die from a far less lethal souped up flu that mainly takes out people at the end of their life who are obese or suffer from comorbidities? And if they really cared about your health or about the NHS would they be sacking highly qualified medical specialists who know more about immunology and virology than any politician ever will and are perhaps the only people in the entire country in a position to give or to refuse an informed consent for a 3 year out of date vaccine with a negative effectiveness? Would they be sacking them in circumstances where the NHS has a huge backlog of cancer and cardiovascular cases?

Rather than sacking Doctors who have made an informed decision to refuse vaccination knowing the risk to their employment future, we should be interviewing them and learning from their expertise and following their example until a full public debate has been heard.

Here is the Key question: Why did every single one of the vaccine companies make a vaccine from the spike protein (1/8th of the virus)? Why did nobody make one from the other 87.5% of the pathogen? What are the chances of half a dozen companies choosing the same 12.5% of the virus from which to make a vaccine? If the process was random the chances would be 1 in 8x8x8x8x8x8 = 1 in 262,144. But it was not random. The WHO provided the 1273 Amino acid spike protein and they all used that. But WHY? Well the largest funder of the WHO is a certain Software Billionaire. Here is the WHO funding for 2018-2019

“Second only to the USA, the BMGF is one of the largest donors to the World Health Organization (WHO) and paid it more than $200 million in 2018 – more than Germany, France and Sweden combined in the same period. But this is not the only way in which the WHO is financed by Gates. GAVI, formerly known as the “Global Alliance for Vaccines and Immunization”, provided the WHO with an additional $150 million in 2018. One of GAVI’s main donors is again the BMGF, with $1.5 billion in 2016, for example.”

“It can therefore be said that the BMGF and thus the Gates family and Warren Buffett are the main source of income for the WHO through direct and indirect channels, which raises questions about its independence from these sources of finance. In addition, the BMGF also provided funding for the establishment of the “Coalition for Epidemic Prevention Innovation” (CEPI), which is concerned with the research and development of vaccines, amounting to around $100 million in 2017.”

“In addition, the Foundation regularly supports non-governmental organizations such as PATH, which are involved in the development of vaccination technologies, with millions of dollars in funding. The list of BMGF’s beneficiaries also includes the largest global pharmaceutical companies, such as Pfizer, Novartis, GlaxoSmithKline and Sanofi Aventis. The comprehensive influence of the BMGF in the vaccination sector is therefore obvious.”

“In the Corona crisis, it is striking that institutions that currently play an important role are likewise supported by the BMGF. For example, Johns Hopkins University which maintains the worldwide corona statistics that are disseminated in all media, regularly receives large donations. In the last ten years only, more than $200 million have been transferred to the university by the Gates Foundation. The purpose of the donations was family planning programs.” –  https://www.weblyf.com/2020/05/how-bill-gates-funds-the-who-and-other-organizations/

So a decision was made through the WHO to make a vaccine from the most pathogenic part of the virus, the protein spike. This decision was not made on health grounds quite obviously. One reason for this decision was immune destruction as we have discussed above.

But there is another reason which is far more lethal and far more insidious than immune system destruction. You may have noticed that governments are acting as if they OWN your body. They are denying you the right to decide what to do with it. They wish to prescribe for you whom you can socialise with.

They wish to be the ones who determine whether you visit your parents or your grand parents when they are sick and in need. They wish to decide who can see your face and whose face you are permitted to see. They wish decide what medical treatments you should have and what pharmaceutical products should be put into your body. Your body – their body is the position they are taking worldwide.

Now if they take that position in legislation, do you think they are not trying to take it in genetics as well?