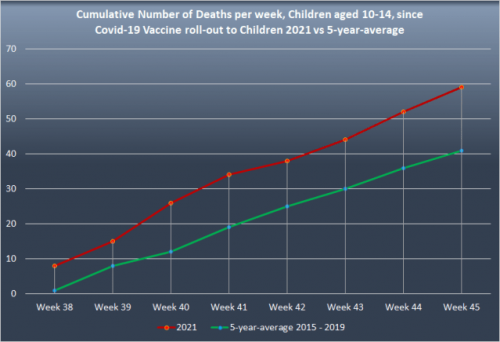 Statistics show that from the week following Chris Whitty’s advice to vaccinate children, up to 14th November 2021, deaths among all children aged 10-14 were 44% higher than the 2015-2019, 5-year-average. With boys seeing a 42% increase in deaths, and girls seeing a 47% increase in deaths. 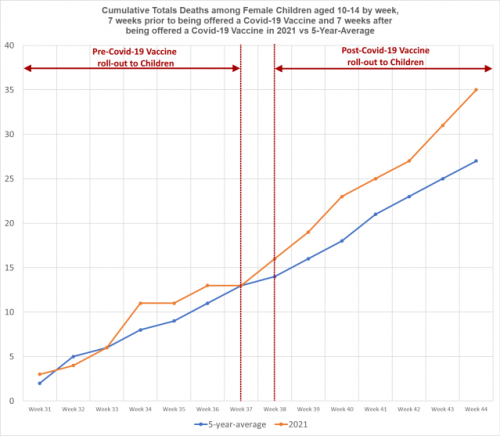 As can be seen from the above graph, the cumulative total of deaths among young girls, in the 7 weeks prior to all children over the age of 12 being offered the jab, equated to 13 in both 2021 and the five-year-average dataset, and then “coincidentally” rose against the five-year-average following the introduction of the Covid-19 injection to children.

Now, several reports from mainstream news outlets have highlighted that a spate of those death among children have been occurring in the West Midlands of England. 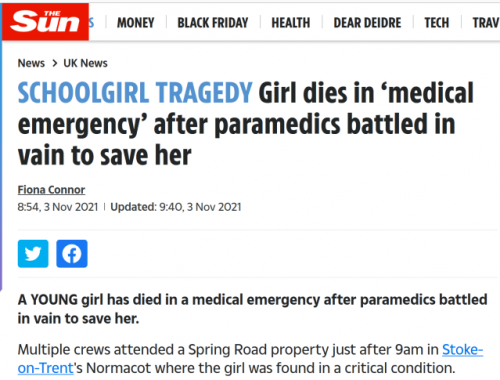 On the 3rd November 2021, paramedics battled in vain to save the life of a young girl after being called to a property in Stoke-on Trent.

The girl, who has not been named, was in a critical condition when the emergency services arrived.

A West Midlands Ambulance Service spokesman said: “We were called at 9.03am to reports of a medical emergency at an address on Spring Road, Stoke-on-Trent.

“Three ambulances, a paramedic officer and the Midlands Air Ambulance from Tatenhill attended the scene.

“On arrival, we discovered one patient, a child, in a critical condition. She received advanced life support on scene.

“But unfortunately, despite the best efforts of ambulance staff at the scene, it became clear that nothing more could be done to save her and she was confirmed deceased.” 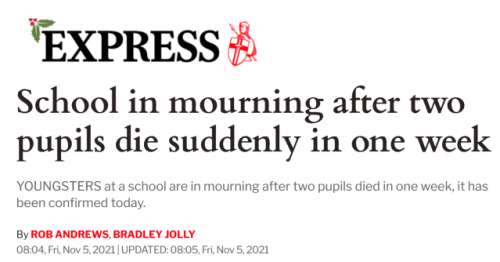 On Friday November 5th 2021, The Express reported that two pupils from the same school had “died suddenly” in the same week.

Harry Towers and Mohammed Habib passed away during October half-term and were both remembered in prayers during an online assembly in St John Fisher Catholic College in Newcastle-under-Lyme, Staffordshire, just up the road from Stoke-on -Trent. 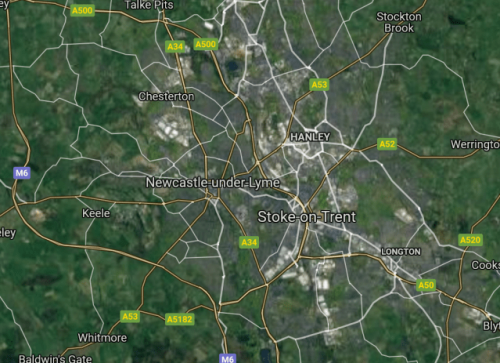 Harry, who was in year 11, died on Saturday October 30th. Whilst Mohammed, a year 10 pupil, died on Sunday October 24th.

“At this stage, the cause of each death has not yet been determined and out of respect for both families, we would ask people not to speculate, particularly on social media, at this very difficult time.” said Garrett Murray, acting Headteacher at the school.

“I would ask that you keep both learners and their families and friends in your thoughts and prayers at this time.” Mr Murray continued.

“The school is deeply saddened to learn of the deaths of two of our learners Mohammed Habib and Harry Towers,” Mr Murray continued.

“We are praying for them and their families and friends and keeping them in our thoughts at this very difficult time.

“I’m in contact with both families and have offered our deepest condolences and support.

“This will have a large impact on the whole school community and we are ensuring support is available in school for anyone who needs it.” 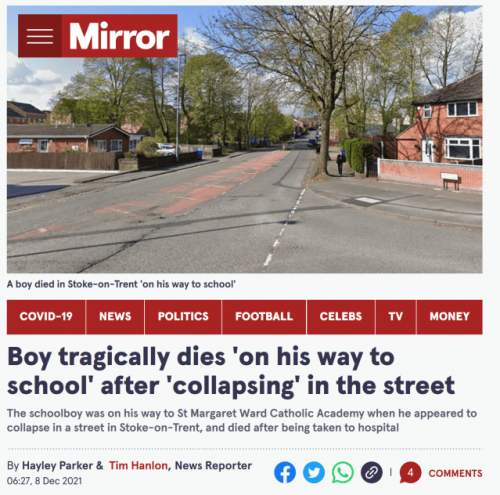 On Monday December 7th, a young boy unexpectedly collapsed on Furlong Road in the city of Stoke-on-Trent whilst walking to St Margaret Ward Catholic Academy.

Passers-by rushed to his aid and placed him in the recovery position as an ambulance was called to the scene. He was then taken to the Royal Stoke University Hospital in a ‘critical condition’ but nothing could unfortunately be done to save him.

Many parents with children at St Margaret’s Ward told of their heartbreak at the sudden death.

Kel Ayssa said: “So heartbreaking. My daughter was in the little boy’s form. RIP little man, thinking of your family and friends.”

And Catherine Byrne said: “My son goes to the school he attended. It’s such sad news. Thinking of his poor family. It’s just devastating to lose a child too soon.”

West Midlands Ambulance Service confirmed they were called to a medical emergency shortly before 9am on the 8th December.

A spokesman said: “Two ambulances, a paramedic officer and a BASICS emergency doctor attended the scene.

“On arrival, we discovered one patient, a boy, in a critical condition, he was conveyed to Royal Stoke University Hospital for further treatment.”

With these spate of “coincidences” all occurring within Staffordshire, located in the West Midlands of England, concerns have been raised that a bad batch of the Pfizer Covid-19 injection may be to blame after an investigation of official data in the USA found that every single known permanent disability and death among children attributed to the Covid-19 injections has been caused by no more than 6% of the individual batches of Pfizer vaccine that has been produced and administered to kids.

The Vaccine Adverse Event Reporting System (VAERS) is a United States programme for vaccine safety, co-managed by the U.S. Centers for Disease Control and Prevention (CDC) and the Food and Drug Administration (FDA).

The programme collects information via reports made by doctors, nurses, and patients about adverse events (possible harmful side effects) that occur after administration of vaccines to ascertain whether the risk–benefit ratio is high enough to justify continued use of any particular vaccine.

This suggests that specific batches of the Pfizer Covid-19 vaccine have been causing a disproportionate amount of harm to children compared to the vast majority of batches produced, with the 20 most harmful batches of Pfizer vaccine from the 748 known batches administered to children all having ‘lot numbers’ that closely correspond ranging from EW0162 to EW0217. 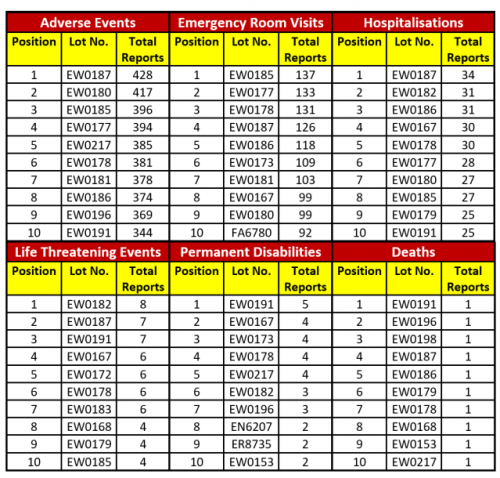 The ‘lot number’ is a specific string of numbers and letters that tracks a specific batch of vaccine from production and into a persons arm and it is usually found on a vaccine label or accompanying packaging.

15 times as many deaths among children due to the Pfizer jab than what has been recorded among children against the influenza vaccines over a period of two years.

With the investigation of VAERS data highlighting that the majority of serious adverse events have been caused by an extremely limit number of the batches of vaccine produced, and various news reports confirming several deaths of children in the West Midlands over the past month, it is certainly plausible that a bad batch of the Pfizer vaccine may be to blame.

The question now, is whether authorities will bother to investigate this further and prevent further harm and deaths to children in England?